The Stories We Tell: Our Truest Rescue

In October I applied to attend “The Stories We Tell,” a testimonial writing workshop for survivors of sexual abuse, assault, and trafficking, facilitated by The Voices and Faces Project. I was accepted and went to the workshop with a mixture of fear and excitement. In my heart I knew this would be an ebenezer for me, “a commemoration of divine assistance,” like Samuel’s stone of help, reminding me that “Thus far the Lord has helped [me].”

Deep inside I knew that being brave and taking this step would mean that my life would change. I would need to write more, and take risks by submitting my work in different places. I would feel more confident to share the hard stuff because as a workshop alum, I would take the honor and the accomplishment seriously and become more outspoken about my own abuse and want to be more involved with the cause of protecting and supporting survivors and calling attention to the the dangers of rape culture and its effects on all of us.

The Dark Figure of Unreported Crime

Threads of Compassion is a loosely connected group of survivors of sexual violence who desire to offer comfort and support to recent victims. The idea is simple. Anyone whose life has been affected by sexual assault or abuse is welcome to knit or crochet a scarf which in turn will be given to a victim of sexual violence when they enter the hospital for emergency treatment. 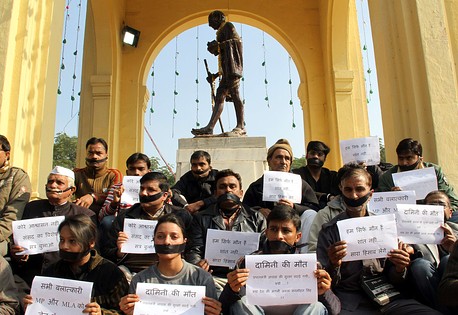 I’ve been reading some posts and articles lately about how difficult it is to correctly number the amount of rapes in a country due to so many unreported assaults. Think of places like the Congo, where you can pretty much assume if a woman or young girl is still alive, they’ve most likely been raped. And now India is reporting extremely high numbers of rapes:

Recent media reports of horrific rapes in India depict a country where every woman is in danger of being assaulted at any time. Official crime statistics tell a very different story.

Last year, there were 24,923 cases of rape in India, according to the government’s official statistics. That’s about two per 100,000 Indians. The per capita rate in the U.S. is more than 13 times higher.

According to criminologists, these surprising numbers are among many that suggest a need for, well, better numbers. Official figures include only crimes reported to police. What criminologists call the “dark figure” of unreported crime isn’t captured, and those missing incidents can greatly outnumber reported ones, especially for rape. The rate of underreporting can also vary sharply by country. And a nation that makes headway in encouraging more victims to come forward will appear, in its official stats, to have a worsening rape problem.

You can  read more of Carl Bialik’s articles here:

Rape: the Darkest Dark Figure of Crime by Carl Bialik

What do you think can be done to make reporting rape safer for people?